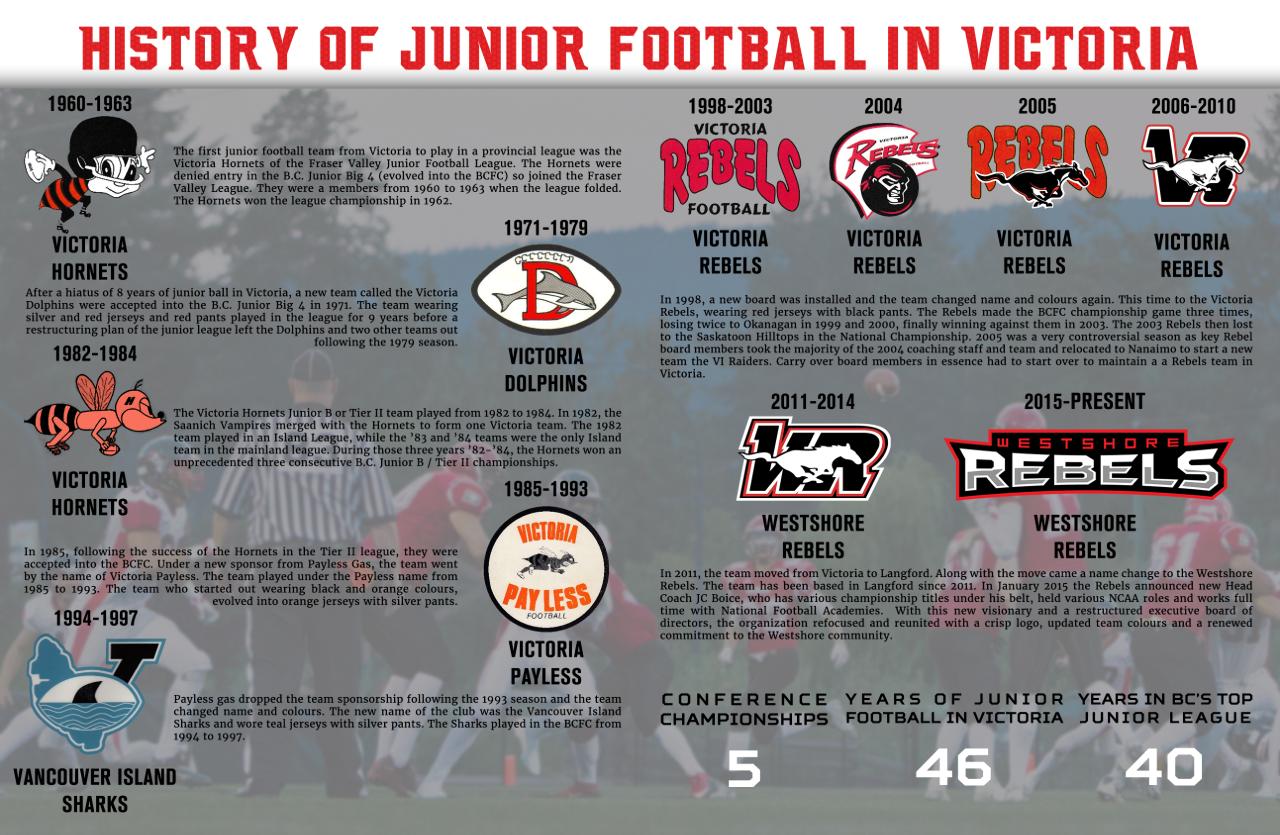 Victoria’s contribution to the BCJFA officially began in 1971 when the Victoria Dolphins were admitted to the league. Under the direction of “Mr. Football”,  Head Coach Frank Hindle, they finished a very successful first year ending in third place with 3-3-1. The next season 1972, the team grabbed second spot behind the powerful Vancouver Meralomas, but unfortunately were defeated in the first ever BCJFA semi-final game, held in Victoria by the North Shore Cougars. The Dolphins participated in the BCJFA from 1971 until 1979. In addition to Frank Hindle, who coached the team in 1971, ’72, and ’77, other Dolphin Head Coaches included Roy Vollinger (1973), Ken Werrun (1974, ’75 and ’76), Brian Gingell (1978), and Paul Shortt (1979). Following 1979 season the Dophins ceased to be a part of the BCJFA.

In 1985, the Victoria Hornets, who had been dominating the BCJFA Tier II league (players 18-20 years of age) under coach Frank Hindle, and were provincial champions in 1983 and ’84, moved up and again became full members of the BCJFA at the Tier I level (players aged 22 and under).

In 1985, the team then became known as Victoria Payless (Payless Gas stepped in and sponsored the team, which helped cover the costs of playing at the new level). This first year back in Junior was also the final year of coaching for Frank Hindle. The team managed a respectable fourth place finish and grabbed the last playoff spot. However, were defeated in the semi-final game by the Richmond Raiders. A new Head Coach, Doug Ferne, took over in 1985 and the team failed to make the playoffs in ’86, but with hard work by Doug and his staff in the off season, the 1987 team had a great year and finished in second place behind BC champs Okanagan Sun. This 1987 Payless club, for the first time in 15 years, hosted a BCJFA semi-final game against the Richmond Raiders, but were upset in a heart-breaker. Midway through the 1988 season coach Ferne stepped down and the head coaching role was assumed by Paul Shortt, who continued through until 1993. During Shortt’s reign, Payless made the play-offs four of the six seasons. The four play-off years were from 1990-93.

In 1994, Payless Gas withdrew their sponsorship of the team and the team name was changed to the Vancouver Island Sharks. The new Head Coach was Rod Outhwaite and although they finished in last place, the foundation was laid for a new era of football. 1995 saw new coach, Gerry Hornett take over, and for the 2 years in which Gerry was the boss, the team registered identical records and fourth place finishes. In 1997, the Sharks fielded a team half made up of rookies, and under new Head Coach John Hugi, who had been an Assistant Coach with the team for 6 years.

During the off-season John Cardillicchia was appointed Head Coach, and the team again changed its name and colours to reflect the new direction John wanted to take them. The 1998 Rebels improved steadily throughout the season, and finished in third place with a 6–4 record. While they lost in the first round of the playoffs, the season had to be considered a success, and the Rebels were looking forward to even better things in the future. 1999 brought more success with a second place finish due to a 6–3-1 record and a CJFL defensive player MVP in Scott Gilbert (Mennie). After a promising win, the Rebels were out played by the Okanagan Sun in their first ever BCFC final. The 2000 season resulted in a 7–3 record and another CJFL defensive player MVP, thanks to the play of Mike Kissinger. The Rebels played the Okanagan Sun and lost in over-time and missed advancing to the Canadian Bowl by a 38–43 score.

John Cardillicchia stepped down as Head Coach at the end of the 2002 season, Matt Bloker who had been an Assistant Coach assumed the head coaching role, and coached for 2003 and 2004 season before the team was moved to Nanaimo and renamed the Vancouver Island Raiders. Paul Orizatti assumed the Head Coach role and in 2005 helped start a new Rebels organization from the bottom floor up, and continued on as Head Coach until the end of the 2008 season.

In 2009, John Cardilicchia once again came on board as the Coach of the Rebels and continued until 2012.

In January 2015, the Rebels announced new Head Coach J.C. Boice, who has various championship titles under his belt, held various NCAA roles and works full-time with National Football Academies. With this new visionary and a restructured executive board of directors, the organization refocused and reunited with a crisp logo, updated team colours and a renewed commitment to the Westshore community. With this new family support, J.C. recruited and retained top coaches and players from across Canada. J.C. with the help of an experienced Coaching team the Westshore Rebels won the Cullen Cup Championship and a chance to play in the 109th Canadian Bowl against the Saskatoon Hilltops. Although, the Westshore Rebels played a heck of a game the Hilltops handed Westshore their first home loss of the season by a final of 37-25.

Head Coach J.C. Boice stepped down as Head Coach at the end of the  2016 season due to family and other commitments and Coach Charly Cardillicchia was named the new Head Coach for the 2017 season. In 2017 the Westshore Rebels ended the season in first place with a 9-1 record but lost to the VI Raiders in the Cullen Cup Championship.